Join us on Wednesday 25 January at 2pm as the Lord Mayor unveils Karen Lyons’ portrait sculpture of Dr Erinma Bell MBE DL  at Manchester Town Hall,  a historical moment as the first female sculpture to be permanently displayed in the building. 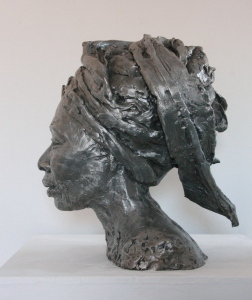 Erinma Bell co-founded the Community Alliance for Renewal, Inner South Manchester Area (CARISMA) to offer life chances for young people by giving them positive alternatives to street and gun crime. She was awarded an MBE for voluntary services to the community in 2008 and she has been made a Deputy Lieutenant of Greater Manchester in 2011.

The subject of the opening chapter of Prime Minister Gordon Brown’s book ‘Britain’s Everyday Heroes’, and recognised as one of the most influential people in Greater Manchester, Erinma is Executive Director of Chrysalis Manchester, a Rotary Peace Fellow and sits on the North West Regional Committee of Crimestoppers, UK.

The 1½ scale sculptural bust has been produced from metal recycled from 50 decommissioned guns, with the support of Greater Manchester Police and Arts Council England.

“I am delighted that this is the first sculpture of a woman to be unveiled in Manchester Town Hall. I feel that the subject has a much deserved presence amongst the existing collection of eminent dignitaries and is completely in keeping with the spirit of Manchester which is to acknowledge the work of grass roots community based activism.”

On the honour, Erinma comments:

“It is a great achievement and a symbol of hope, aspiration and piece. Gun crime is not completely eradictated however, working with people to better their lives and their communities and provide positive role models to their children secures a better future for all of our future generations to come.”

The shared goal of Guns to Goods is to build awareness of those charities affecting long-term change so that more and more people can contribute to the reduction and eventual eradication of armed violence in our streets.

Guns to Goods co-founder Paul Haywood recognises this as a landmark achievement:

“This is a landmark achievement for Guns to Goods and a significant moment for Manchester. Karen’s portrait of Erinma is a perfect response to our central mission, that of dismantling weapons of violence to recycle their metal into artefacts of lasting aesthetic and social value. It is a lasting legacy that celebrates the genuine contribution of one of Manchester’s proud citizens in building community cohesion for the benefit of all.”

Manchester Town Hall will be the final stop of the scultpture’s tour, since its unveiling at Manchester Cathedral in March, before moving to the People’s History Museum in September.

All are welcome to attend and to hear from Karen and Erinma about the story behind the sculpture and significance to the history and hope for the future of Manchester.